Good day my friends, I would like to welcome you aboard our little French Riverboat the [Nadine, Elizabeth (Belle), Juliet, Annabelle, Henrietta, Suzanne, Marguerite, Maria, Isabelle, Paulette, Georgette]

I am your captain and as we pull away from the dock, I would like to remind you to keep your arms and legs inside the boat at all times, for if you leave them out for just a ‘little too long’, ….they may come back a ‘little too short’.

Boat pulls away from dock and starts around a corner

For we will be traveling down the dangerous Lavaca river which in 1861, our leader, Cavalier De LaSalle sailed looking for an alternate route to the Mississippi River. But he has was never been heard from since.

So that we don’t meet up with his same fate, I have sent ahead a French Riverboat captain and two river scouts, Jacques and Pierre, there camp should be just around this bend,

but wait? /excited voice/…. oh no? it looks as though the Indians have attacked the camp.

a campsite; fires burning from the battle;
dead Indian figures laying on the ground;
dead riverboat pilot lying on a sea chest with an arrow in his back

There is our river boat captain, lying on his chest. That’s him in the arrow shirt. It looks as though he got the point of the Indian message.

But I don’t see our river scouts, Jacques or Pierre, anywhere about, perhaps they escaped with their lives and we can find them as we continue our journey down the river. I certainly hope so, because we will be lost without them.

Over to my left is a pack of hungry timber wolfs and it looks like they had someone over for dinner. I don’t think that they will be bothering us.

Pack of wolfs sitting around a pile of bones.

Over to my right is a more friendly scene. Some friendly Tejas Indians are helping the Friar build the Mission San Francisco de los Tejas.Spanish Mission

Partial log mission, Indians carrying logs
Friar looking at scroll and nodding up and down.

You know, though, they have been building that Mission for 17 years and they still aren’t through. Maybe they should just rename it….’Mission Impossible.’

But wait, /quietly/ up ahead is a Spanish Fort. And as you all know, Spain and France have been at war for ten long years over this little piece of land known as Texas. Perhaps if we are very quiet, we can sneak by. But wait, they have spotted us.

Spanish Officer raises up in the fort watch tower
and drops his sword signaling the cannons to fire.
Each of three cannons begin to fire, three times each.]// As the cannons fire

Oh no. I near miss to the front and another to the side. We will have to abandoned ship, Women and Children first, AFTER THE CAPTAIN OF COURSE. But wait, they have stopped. It appears as though the Spanish can’t even hit the broad side of a little French River boat and we can continue on our journey in safety.

But don’t look to my right. There’s Jacques and Pierre, our two French River Scouts, hanging from that tree.

Two French river scout type figures
are hanging by their necks from a tree branch.

Oh well:It looks like they are at the ‘ends of their ropes’.Oh Jacque and Pierre, they always were the ‘swingers of the swamps’.There they are, just ‘hanging around’.It seems that they found the last ‘stretch of the river.’

I guess we will just have to travel on without them, but wait, look up in that tree, it is the Famous French Fur Trapper, Francis. I’ll just ask him if it is safe to go on.Fur Trapper

French fur trapper sitting high in a tree, shaking his head. // Yell out of the boat. Francis, is it safe to go on?

Look, as you can clearly see, he is shaking his head back and forth, which in French means ? ‘no.’ We could turn around, but I don’t think we would get past that Spanish Fort again, so we will have to continue onward.

You can also see Francis shaking his leg back and forth. After 17 years in that tree, I think that is French for… ‘I need to go to the restroom.’

But wait, did you hear something ahead?//popping sound

Indians on inside of river shooting at Frenchman hiding behind wine barrels on the outside of the river. Wine is leaking out of barrels shot in the fire fight.

Oh no, we are caught in a cross fire between these Indians on this side and our own Frenchman on the other. Everyone down to the bottom of the boat, for it would be quite a shame to be shot by one of our own country men.

I think that we made it safely by.

But look what the Indians have done to those barrels of wine. Once King Louie finds out what is happening to the wine that he is shipping to Texas, he will start sending Milk instead.

We have now entered the most dangerous part of the river, the ‘uncharted territories’. As you can see, everywhere are dangerous alligators, just waiting to make a meal of us. Why I have been told that there was once an English Teacher that stuck her hand outside of the boat right here, // pointing to alligators open mouth….
and now, she is teaching ‘shorthand.’

Oh no, everyone down, that’s a Caddo war party and those arrows are poisoned tipped, one scratch would mean instance death. That was very close, luckily they have decided not to fire.War Canoe

war canoe appears and moves behind the bushesPop-Up Bear

beside the boar on the other side, a bear pops up and growls

Don’t worry, that just a bear fishing for his dinner in the river.

Over here is a Caddo Indian burial pier, the Indians buried their dead six feet above the ground in the hopes that that would give them a head start to the happy hunting grounds above.

Here a momma bear and her cubs are stealing some honey from those bees. And boy are those bees mad. Then again, I bet you would be pretty mad if you came home one night and found out that some animals was ? trying to steal ‘your honey.’

Over here is an Indian village and the Medicine man is trying to ward off the evil sprits.Indian Village

Hay ya, Hay ya, Hay ya
Indian Medicine man dancing around pot on the fire
Indian women cleaning clothes in the river

…..’they are somewhere else.’ Lets hope that we don’t find out where.

Wait, everyone quite, there’s a cougar looking for his dinner, one wrong move and we will be it.

The Cougarcougar is on a branch hanging out over
the river next to the boat, slowly the
boat passes the cougar by.// Very loud scream:

Here to my right a bear is fight off a pack of hungry timber wolfs. And as you can clearly see, he is fighting them… ‘bear handed’. I bet that he will… ‘barely’ escape from that situation. I just can’t …’bear’ to watch.

Look though, there are only five wolfs in that pack. If there had been one more, that poor bear would have been up against ‘a six-pack’.

Oh no, everyone to the side of the boat, as you can see on my right, there’s a river whirlpool dragging that poor soul to a watery grave.

hand sticking up from the water
holding a stick going
around (causing?) in a whirlpool

There is one thing that I can say about him however, he sure knows his way ‘around’ this swamp?

Over here is a more friendly scene, a group of beavers are hard at work building a dam. But wait a minute, look out,

Beavers standing in clearing near small tree//excited// that tree is going to fall,

Why, I do believe if that tree had been just a little bit longer, this boat would have been ….just a little ‘bit shorter’.

‘Leave it to Beaver’ to pull a stunt like that.

It seems that one have come to a fork in the river and I don’t know which way to go. I guess we should try this way.

But look out, everyone down. We are surrounded by Caddo Warriors. I guess we should have gone the other way.War Party

Indians on both sides of the River
threaten the boat with spears and arrows.

Everyone smile and perhaps they will think we are friendly. It looked like it worked, they are letting us pass,

but, oh no, here is why. We are heading for a waterfall and a solid rock wall behind it. The river is much to narrow to turn around here and we can’t go back past those warriors. I guess this is the end of our journeyThe Waterfall

ahead is a Water fall and behind it is a solid rock wall. // The captain stops the boat.

But wait, the wall is opening.// Boat starts back up.

We must have discovered a secret Indian treasure cave, for the Indians were known to hide their treasure in caves such as this.

treasure chest with dead skeletons. (as opposed to live skeletons?)
looks more like a pirate cave than an Indian cave.

// skeleton swings out from the dark.

It looks like that pour sucker has been on ‘a crash diet’.

There is the treasure, it looks like many that have tried to take it have paid with their lives.

Oh no, the walls behind us are closing, we are trapped inside.// boat moving very slowly.

But wait, the walls in front are opening, the Indians are repaying us with our lives for not disturbing their treasure.

And look, there is the flag of France, viva La France, we have made it back to Fort St. Louis and safety.

Back where we started

As the boat approaches the dock, I would like to remind you to keep your arms and legs inside the boat and please remain seated until the boat comes to a complete stop.

I hope you enjoy your day here at fun filled Six Flags Over Texas.

Unloading Spiel: // in sort of a rambling manner.

Please watch you head as your heading out, and watch your step as your stepping out, but most importantly of all, watch out for my poor aching feet.

Why just this morning a spaceship full of half-crazed Martians landed at the front gate, got out of their ship, checked their brains in at the public lockers and came down here just to step on my feet.

Enjoy your stay here at Six Flags Over Texas and remember that there is only [insert exact count] shopping days left until Christmas.

A few notes about this Spiel: 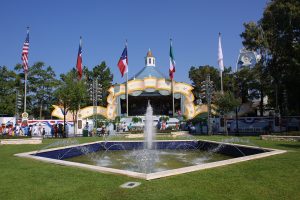