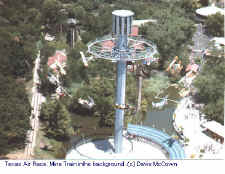 The Tower is a 300 foot tall observation tower shaped like an oil derrick. It first opened for the 1969 Season and is the park's ninth oldest operating ride. It is billed as "the world's largest land based oil derrick", but of course it can not function as an actual oil tower.   The Tower is the tallest structure in the park.

The ride was built by Intamin. It was constructed in an area that was a part of Skull Island which contained the Pirate Ship and cave. It replaced the Crane Ride in the Boomtown section as the park's observation ride. The Crane Ride was closed at the end of the 1968 season. 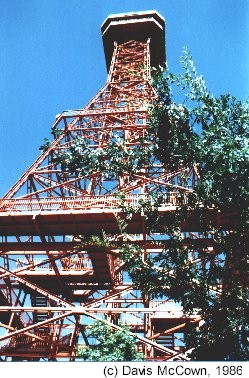 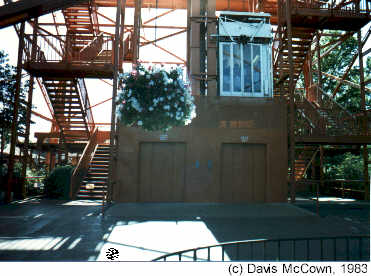 Two high speed elevators take riders to the tower's two observation platforms. From there the entire park can be viewed. On a clear day, guests can see all the way to Dallas on the East and Fort Worth on the West. Arlington is to the South and the mid-cities to the North. Telescopes are also available for a quarter for close up viewing.

A railing wraps around the tower at the 100 foot level. This railing is nonfunctional, however, and only provides "balance." There is no platform at this level. 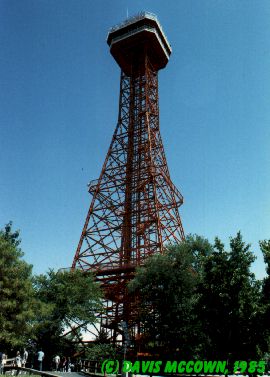 Originally the tower had a twelve lane slide attached to the fifty foot platform. The slides traveled off the East side of the tower, towards the area that is now the roaring rapids. The slide was removed in 1976. The platform and railing are still visible at that level. 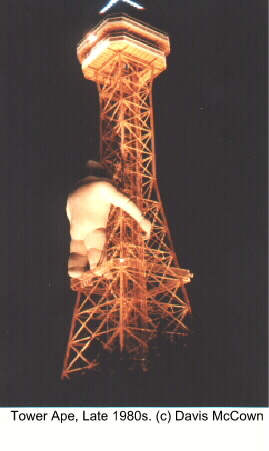 In the 1980s, the shoulder high railing system was supplemented with a mesh fencing which caged in the entire observations deck.

The entire elevator system was rebuilt and closed for the 1998 season.

The Tower has sister towers at Kings Island in Ohio and Kings Dominion in Virginia. Although the other Towers are shaped to look like the Efle Tower, they are both dimensionally almost identical to the Texas Tower. 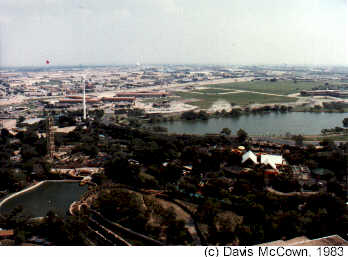 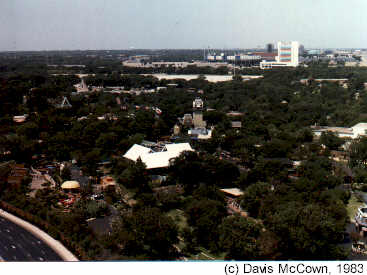 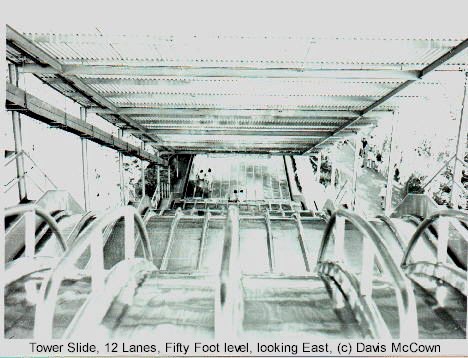 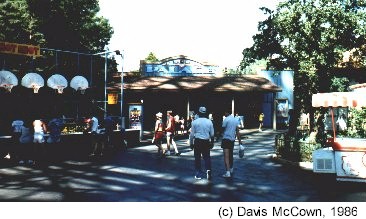 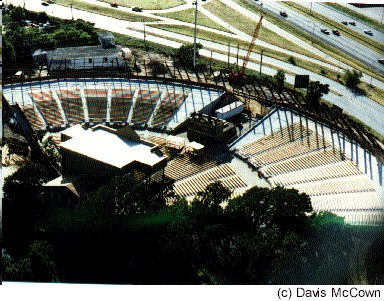 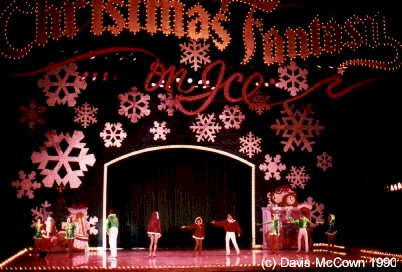 The Shockwave features an initial 116 foot lift, followed by a 36 degree drop into the two seventy foot loops. The one minute, fifty-eight second ride travels through 3,500 feet of track. The trains travel at up to 60 mph, with banks up to sixty degrees while the riders pull up to 5.9 g’s. Three trains of seven cars each can hold up to 28 riders. The ride capacity is 1,800 an hour. 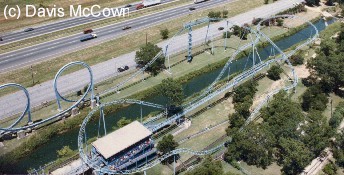 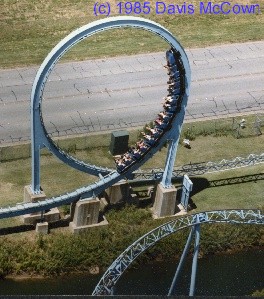 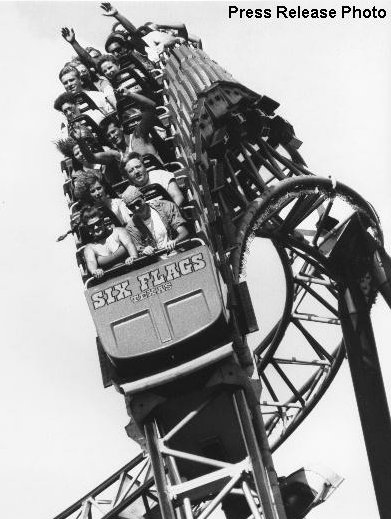 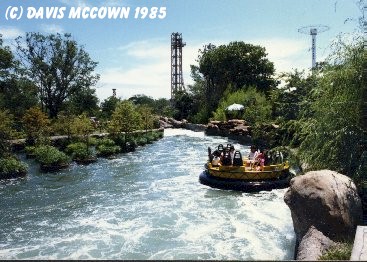 When it opened in 1983 the Roaring Rapids raft ride was the largest, most expensive ride ever constructed at the park. The raft ride, designed to simulate the experience of white water rafting on a raging river, is  located just south of the Tower and physically takes up more space than any other ride in the park. 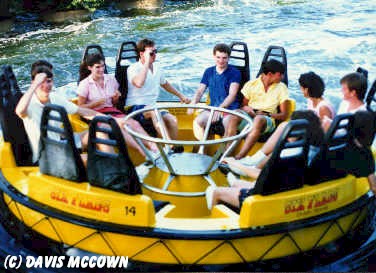 The ride replaced both Skull Island and LaSalle's Riverboat Adventure, which were removed after the 1983 season to accommodate the new ride. Construction actually began August 16th, 1982, the day after the Riverboat made it last trip. 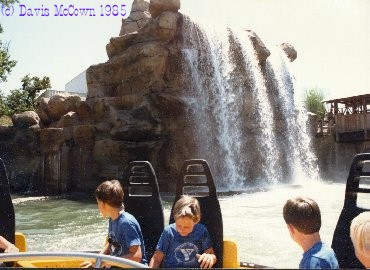 The ride was designed by Six Flags and built by Intamin A.G. at an estimated cost of $4.2 million dollars. (Intamin A.G. also built the Shockwave, Tower, and Spinnaker.)

The concept for the ride was inspired by the man-made river used for the kayak races in the 1972 Summer Olympics in Munich. The first ride of this design was built by Six Flags for the Six Flags Astroworld park and opened in 1980. 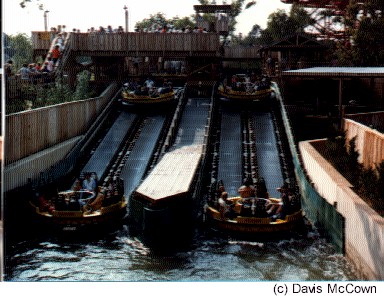 The ride constitutes of three lakes and four stretches of rapids. It is 80 feet across at its widest point and 16 feet wide at its narrowest.  The "river" is filed with 1.5 million gallons of water and is powered by two 400 horsepower pumps which pump 150,000 gallons of water per minute. These are supplemented by five water jets.

The ride's reservoir is capable of holding 2 million gallons. 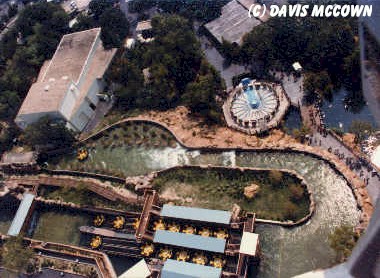 With an average water speed of 16.6 feet per second, the river grade drops 14 feet from start to finish. The 1/4 mile ride takes about 2 minutes to complete.

The ride is equipped with 20 twelve passenger boats and can carry approximately 1,200 riders per hour.

As of 1983, all six of the theme parks then owned by Six Flags operated a ride of this nature.  Today, virtually ever major amusement park has a similar ride. 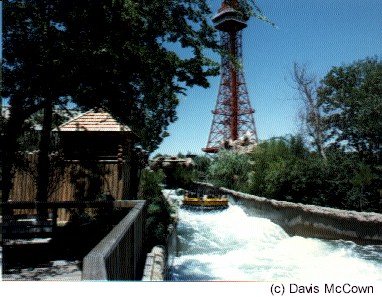 The Hollywood Stunt Show was staged during 1991 at the Tower Theater, where it replaced the Dolphin Show. The show featured trained stuntmen performing various action scenes. There was little change in the theater for the new show. The pool itself was covered to create a large performance area, with a western town facade added at the back.

The Hollywood Stunt Show was produced by Benros Worldwide Entertainment and was staged for one year. Benros later produced Gunfight After the OK Corral and Bad Day at the Backlot stunt shows in the Texas section of the park.

In 1992, the show was replaced by the Batman Stunt Show.

In addition to producing shows in numerous other parks, Benros staged the Colossus show for Freedomland in 1961. 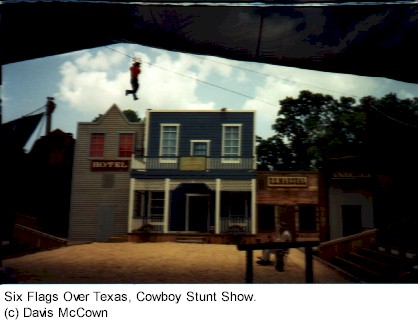 During the show, one character entered the arena using a zip line mounted on the fifty foot platform of the tower.

The Great Air Racer was a high swing ride installed for the 1984 season. The ride units were shaped to look like barn-storming bi-planes. Each plane was designed to hold six, with three seats, each holding two adult riders.

After the twelve planes were loaded, a structure rose up the middle of a large tower structure. The planes, each connected to cables, rose in the air with the structure. As the planes rose, they began to spin around the tower. Eventually, the force of the spinning planes forced them to spin further and further from the tower.

At their highest, they were nearly 100 feet off of the ground. The plans reached a spin rate of 36 miles per hour. After a few minutes of spinning, the rotation slowed and the planes began their descent back to the tarmac below them.

The ride was installed by Intamin and cost two million dollars. A sister ride was built at the Six Flags over Georgia park.

It was removed after the 1999 season. 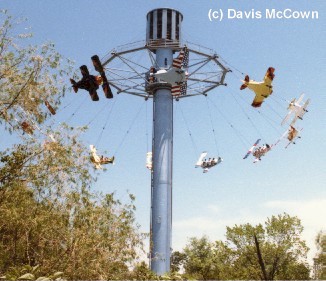 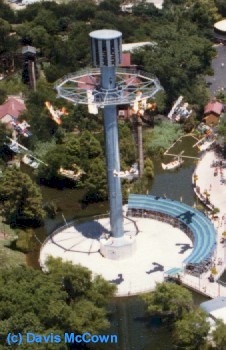 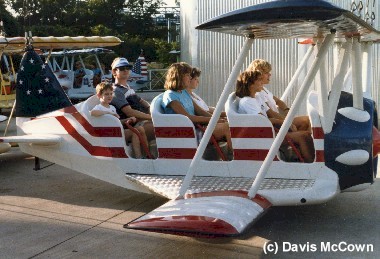 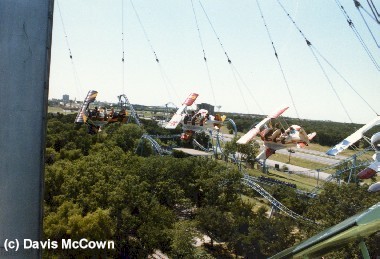 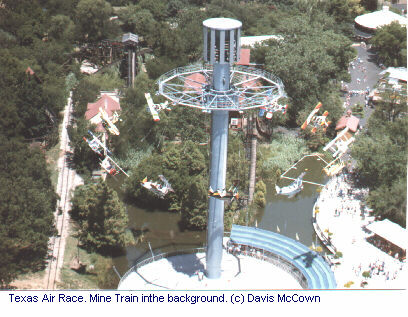 A go-cart track was added for the 1999 season between the railroad tracks and the Shockwave. Riders race traditional go-carts around the winding track. The track sports forty go-carts, twenty-four of which have individual seating and sixteen of which have dual seating. Only twenty carts run on the track at any one time. Track races last four to six minutes.

The track and carts cost the park $500,000. Premier Parks installed similar tracks at nine of its 25 parks. There is a $5 up-charge to race the carts. 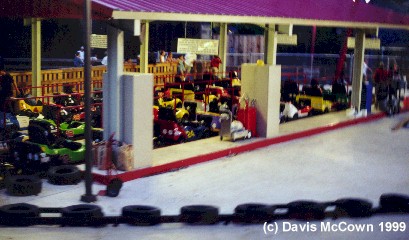 The park opened the Superman tower ride for 2003. The ride, a three leg free-fall tower, stands 325-feet tall from the ground to the top of the ten-foot tall US flag mounted on the structure. It is one of the world’s tallest free falls rides. At the time that it was installed, it was the tallest structure in the park when measured to the top of the American flag.

Built by S&S Power, Inc. of Logan, Utah, each one of the three legs has three sides. Each of the three sides holds three seats, for a total of twenty-seven simultaneous riders. The ride has a capacity of 1,200 riders per hour.

The ride seats are propelled by compressed air. Riders feel 3.5 g’s on the ascent and a negative .8 g’s on the descent. The cost of construction was estimated at over $10 million dollars.

The Superman Tower of Power was previewed with a media event on Wednesday, March 23rd, 2003. The ride officially opened to the public the following Saturday. Twelve contest winners were the initial riders for the ride’s official opening. Named for Superman, the hero of comic books, TV shows, and movies, the ride followed the park’s practice of naming rides after DC Comic characters. 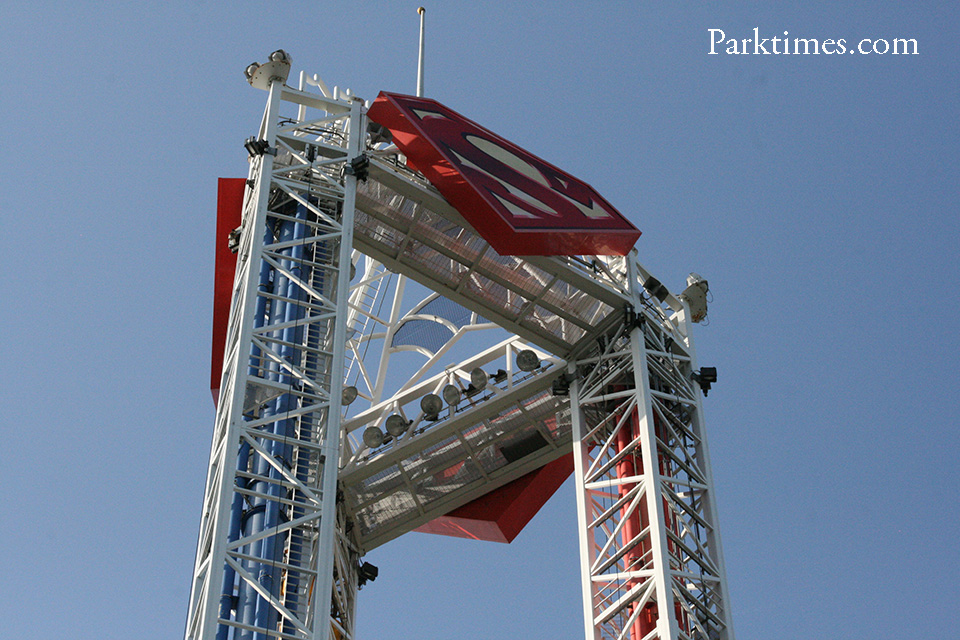 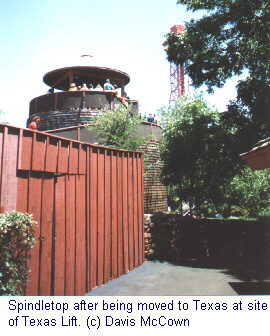