"El Aserradero", or the sawmill in English, was the official name for the Flume Ride when it first opened in 1963. The name refers to the building housing the first lift, which is designed to replicate a log saw mill. Employees generally refer to the ride as the "Flume Ride" and guest simply  call it the "Log Ride".

The Log Flume Ride is tied with the Carousel Ride as the fourth oldest attraction in the park. They are surpassed only by the Railroad, the Chaparral cars and  Casa Magnetica. It is actually been operated more seasons than either the  Carousel or  Casa Magentica, in that both have been closed at various times for more than one season. 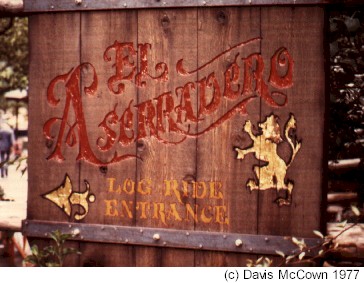 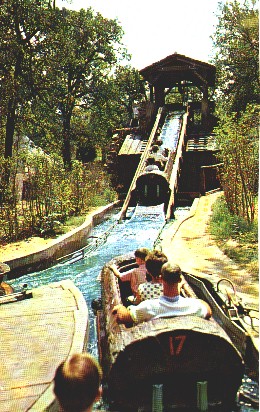 The ride is simple in concept. Guest float around a large "flume" in small fiberglass boats designed to look like wooden logs. The ride starts with a trip up the "low lift"or "lift 1". A pump under the lift raises the water to the height of the flume at the bottom of the lift. The logs are carried up the lift on a conveyor belt, then drop down the slide into the flume, which at the bottom of the "low lift" is higher than the rest of the ride.

The "logs" then float around the curving flume, carried forward by the the water, which is actually traveling slightly downhill. The ride reaches the bottom of "the high lift" or "lift 2". The water at the base of this lift is the lowest level of the ride. The logs travel up another conveyor belt and then drop down a much higher slide to the end of the ride. The final drop creates the splashing effect for which the ride is famous. 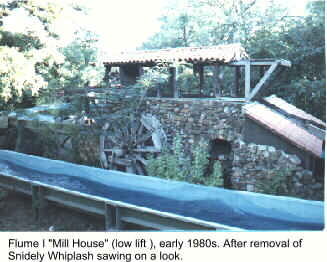 The ride was constructed by Arrow Development, which originally built rides for Disneyland. Six Flags over Texas was the first park to receive Arrow rides outside of Disneyland. Arrow also built the  Happy Motoring and Chaparral Cars and would later build the  Runway Mine Train. 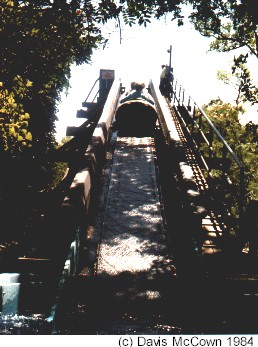 The ride replaced the burro ride, which had been located in the same location.  The flume, as with the burro ride before it, together with  Casa are all that consisted of the Spanish section.

The ride is reminiscent of older "shoot the chute" rides at parks and fairs. In this rides, small boats floated down a large slide onto a large pond or pool. 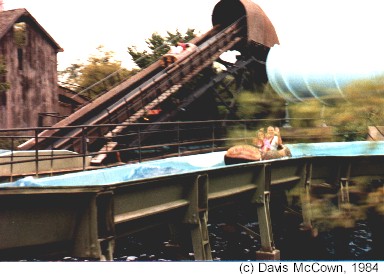 The Log Ride proved so popular that Six Flags added a second flume in 1968, five years after the first. The second flume, Flume II, is essentially the same as Flume I, and is generally operated only on high capacity days. 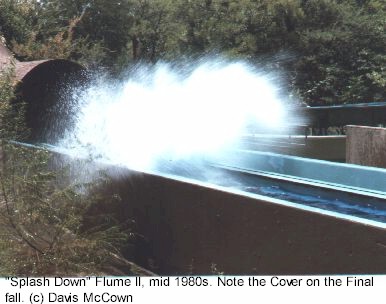 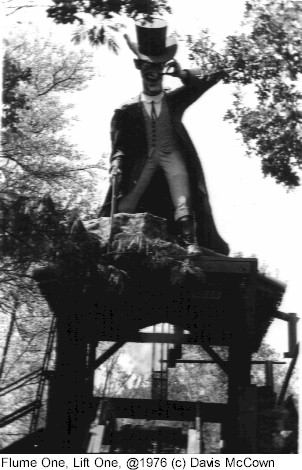 The ride has changed little over the years. During the 70s, the ride was  enhanced by several animations.  Lumberjacks could be seen in the woods sawing logs. A large villain character stood on top of the Flume One Mill house sawing on a large log. The log created the appearance that any minute it would break off and fall on any riders beneath it.  He had a constant repetitive laugh that got very old for the employees working the ride.

His counter-part was a large "Paul Bunyon" type lumber jack that stood atop of the low lift of Flume II. He swung a large axe back and forth at the logs as the rode underneath of him.

Also for a time, the drop on Flume II was covered, creating a tunnel through which the riders dropped. 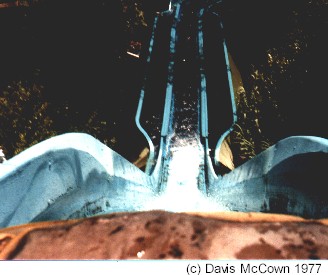 At one time billed by the park as "the most popular and exciting ride ever  devised."  The ride is now overshadowed by the larger water rides, such as Splash Down Falls and LaSalle's Rapid Adventure.

Ride capacity at each flume is approximately 1,000 per hour. 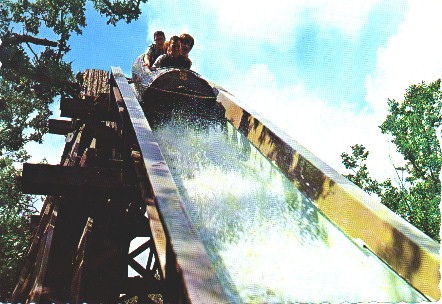