A review of "Six Flags Over Texas, The First 50 Years" has been published by Michael R Virgintino at Cedar Park Patch:

Learn more about the book and amusement park history by checking out this interesting review.

Six Flags over Texas, The First Fifty Years - A Pictorial History, traces the history of the Texas park from its conception and construction to its Fiftieth Anniversary. Featured are each of the major attractions which have come and gone over the years. 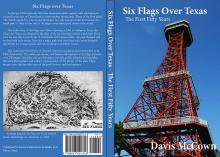