Skull Island was one of the original attractions at Six Flags Over Texas on opening day in 1961. Skull island was more of a section than just an attraction, in that it was a themed area consisting of other attractions.  From its opening in 1961, it expanded to its largest in 1968. After the opening of the tower in 1969, it dwindled down to nearly nothing, when the last remnants were removed at the end of the 1982 season. The Island was a activity area themed loosely on the exploits of Jean Lafayette, and other pirates, off the Gulf Coast. 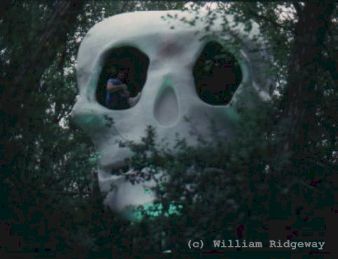 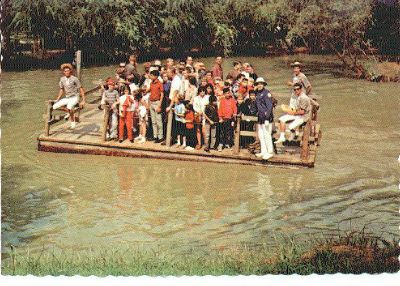 When the park first open, guest access to the island was solely by the skull rafts. The rafts, with their gas powered engines, where design to look like a log cotton raft from the days of the old South. The trip to Skull Island started at the raft ride que house, located in the Confederate section between what was Naler's Plantation Chicken House and the Amphitheater/Southern Palace. (Now roughly the site of Runaway Mountain.)

The rafts, guided by host and hostess, traveled across the Skull Lake to the back side of the Island, where the guests disembarked. The rafts then carried those waiting back to the dock.

The "Skull Rock" was the central element of the Island. The skull shaped rock stood nearly two stories tall. The skull slide traveled out the left ear of the skull, turned 90 degrees, and ended to the front side of the skull. Entry to the slide was through the right ear. While waiting their turn, guest could look out through the skull's eye sockets.

The other feature of the original attraction was the 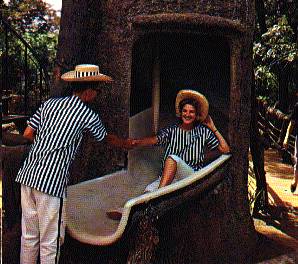 Swamp Tree Slide. Access to the 30 foot high tree slide was by a steel rail staircase which spiraled around the fake tree. Once at the top guests slide down a tightly winding spiral slide located inside the hollow tree. For the ride down, the guests sat on burlap sacks.

Skull Island was immediately expanded for the opening of the 1962 season. A whole new section of the island was opened to the north and west of the original section, in what is now the Tower area.

The new area contained a scaled down pirate ship, on which guests could climb and play pirates. There were also paths to travel and a pirate's cave to explore. Bridges next to the loading dock connected the two sections.

In 1963, the bridges between the sections were expanded to included a tree house on each side of the water between the old section and the new section of the 'island'. Suspension and barrel bridges connected each side. Slides come down from the 'tree house' on the new side.

In 1964, the island was again expanded with the addition of three more Swamp tree slides on the Island in the middle of Caddo pond. Access to these tree slides was through a climbing suspension bridge 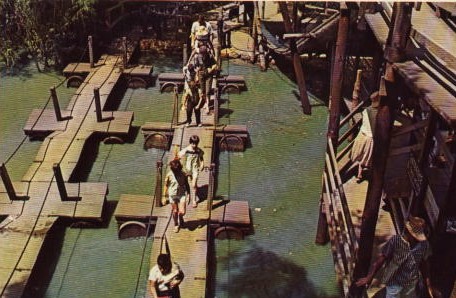 that started from the new section of the island, as well as a lower bridge which started at the same location. The Indian canoes circled around the Island and under the bridges.

The Pirate ship and cave were removed before the 1966 season, although the area they were in was still part of the island.

The construction of the Tower for the 1969 season lead to the removal of the Swamp slides on Caddo island, as well as all of the 'new section' built in 1962. Skull Island was now back to its original size. For the first time, however, access to the 'island' was not restricted to the skull rafts. Guests could now access the island from the suspension and barrel bridges that used to connect the two sections of the Island. The bridges now connected the 'Island' to the Tower area.

The Island was virtually unchanged until the end of the 1976 season, when the Skull Rafts and last remaining tree slide were removed after sixteen years of service. The log rafts were removed from the park to make room for the Spinnaker. The que house for the rafts became the que house for the Spinnaker. The tree slide was removed to make room for a Pirate Boat theater which opened for the 1977 season. Skull Island could still be accessed from the barrel bridges, and the original attraction, the skull rock slide remained.

The Skull rock was removed in 1978, as was the pirate ship theater. All remnants of the island were removed at the end of the 1982 season to make way for the Roaring Rapids.

Nothing remains of Skull Island in the park today. 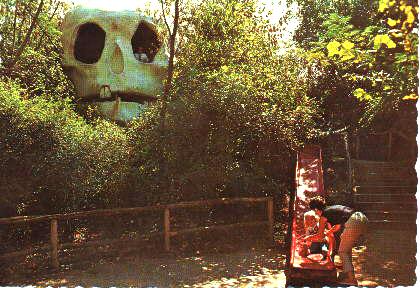