New for 1977 was the Spinnakker, an Enterprise Style ride built by Intamin. Located just south of the Tower, the ride was composed of swingin gondolas units in which 1 or 2 guest sat. The ride would start parallel to the ground, where it would start to spin around, similar to carousel. It would spin continuously until the capsules were pointing straight out, parallel to the ground. At that point, the ride’s arm lifted up to a 90 degree angle, so that the riders were spinning up and down, as with a Ferris wheel. The difference with a Ferris wheel, however, is that the ride spun very fast, and when the gondolas reached the top of the circle, the riders were turned upside down. The spinnaker was a very popular ride at amusement parks. It was a very visual entertainment, especially at night when it was well light. The Spinnakker was removed and installed at Six Flags Fiesta Texas, where it was dubbed the “Wagon Wheel.” 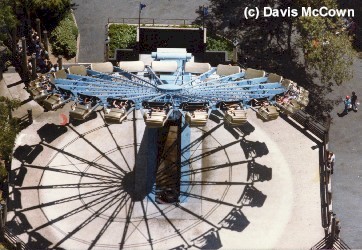 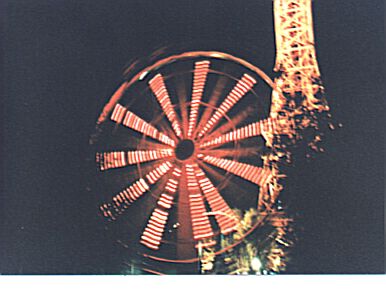