The Humble Happy Motoring Freeway (known as the "Modern Cars") opened with the Park in 1961.  The track ran along the South edge of the Modern Section from near the Zoo to the area that would become Boomtown.

The ride consisted of small go-cart sized vehicles with sport car bodies. Each of the twenty-two cars were powered with a 7½ horsepower rear gas engine. The gas pedal on the driver’s side actually moved the car forward, while the steering wheel controlled the direction of the cars travel.

The cars traveled around the track at six miles per hour, passing billboards and waiving by-passers. Just to make sure that there was no rush hour grid lock, the roadway contained a metal guide-strip directly in the middle. The guide-strip prevented the cars from leaving the track while still allowing the driver to steer the cars on the track.

The ride was favored by the younger crowd, because it allowed them to actually “drive” the car, controlling both the speed, and within limits, the direction of the car.

Eventually the body style of the cars changed in order to keep the appearance of the cars up to date with actual car styles and designs.

Due to the popularity of the ride, in 1962 a second Happy Motoring Freeway was added next to the first track. The queue house used by the Sidewinder Rollercoaster was converted into the queue house for the second happy ride.This increased the number of cares on the two tracks to 38. In order to make room for this second track, the Sidewinder roller coaster in turn was moved to the Mexican section.

Six Flags would operate with two Happy Motoring tracks until the end of the 1980 season. At that time, the original track was removed. The track added in 1962 continued to operate as the lone track until 1986, when it also was removed. 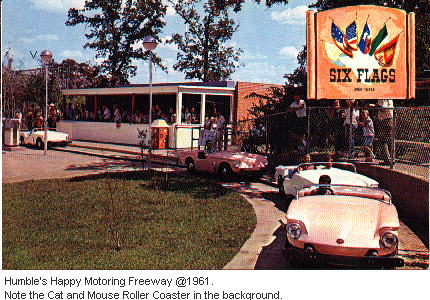 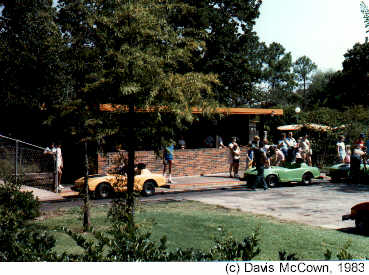 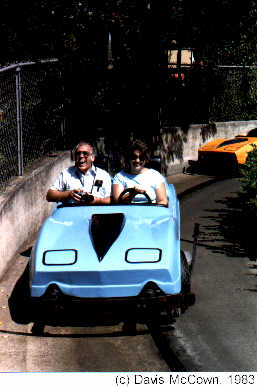