Casa Magnetica is one of the oldest remaining attractions in the park. It is known as the "crooked house" by many guests. It first opened in 1962, for the park's second season. At one point in the 1980's it was rethemed as a different attraction. It was, however, soon returned to the "Crooked House".

The principal of the house is simple, being built at an extreme angle creates an optical illusion that items are rolling uphill.  The entire attraction is built around this one simple illusion.

This is a walking tour in which a host or hostess guides the guest through the house, explaining its history and demonstrating its anti-gravity effects.

Buenos Dias (Good Morning) - Buenos Tarez (good afternoon) - Buenos Nochez (good evening) amigos, and welcome to Casa Magnetica. You are about to see the strangest house ever built by a man.   Don Juan of Madrid, an inventor of sorts, decided that his home was just like everyone else's and he wanted this place to be a little different.  I think you'll agree he succeeded once you see the magnetic house.  Up seems down and down seems up ...even mother nature seems to be a little confused about this place.  So, be careful to watch your step and just follow this pathway.... (open gate)

You are now leaning in the first, and smaller, room of Don Juan's Casa Magnetica.  Don Juan built his house with convenience in mind, and he believed too much of life is spent in the trivial matters of day-to-day existence, such as house cleaning.  To help solve this problem, Don Juan invented this unique broom.  Each day he would sweep out his house, and then simply let go of the broom.  As you can see, it will stand wherever you leave it, a timesaving device indeed.

Having included many such devices in his house, Don Juan suddenly found himself with a large amount of free time on his hands.   Refusing to be idle, he took up the art of painting.  Don Juan was a great inventor, but unfortunately not a great painter.  In fact, he paint so slow, that the fresh fruit he often used as art subjects spoiled before he finished his paintings.   In such cases, he would place the spoiled fruit on this table, and as you can see, it rolled up the table, out the window, down the mountain, never to bother Dan Juan again.   (Walk to chain and shake it)  And now, if you will kindly stagger into the next room, there is much more for you to see. 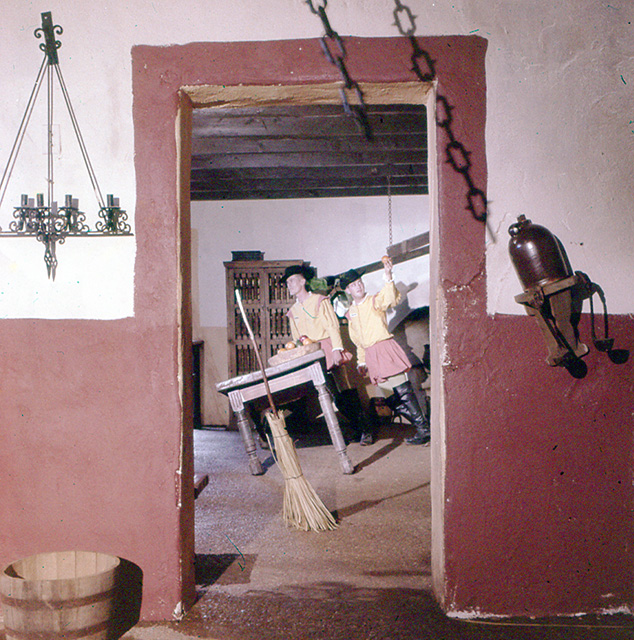 Case Magnetica has been well preserved by Six Flags.  You are now standing in Don Juan's dining room, just as it was many hundreds of years ago when he lived here himself.  Continuing his policy of building a house of ease, Don Juan felt it necessary to have a simple way to get breakfast.  Thus, he created this unique system, whereby the simple touch a lever, fruit is delivered right to your hand.  (Start the oranges rolling up the trough when you say "Continuing his policy...")

For all his greatness, Don Juan had one fault, he was eccentric.  Living in the wilderness made food both scarce and hard to get.   Because of this, Don Juan disliked dinner guests who were always stopping by.   Applying all his inventive talents to the problem, he came up with an answer, this table.  Should a guest happened by at meal time, and ask for, say, an orange, Don Juan would sit them on the far site of the table, and then roll one down. As you can see, the guest seldom got what he ask for, but soon got the idea, and never returned, for fear of starvation........

Now mi amigos, it is time to say "adios". We hope you are enjoying your visit at Six Flags and we hope that you come to visit Casa Magnetica again. 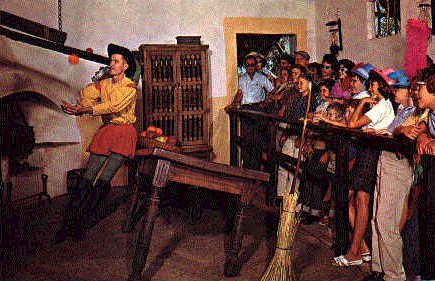