In 1985, Six Flags brought back a feature that had 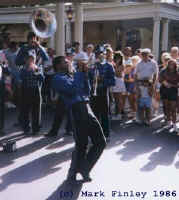 been missing from the park since the early days, a marching band. This generation of musicians would be very different from the military style of the early 60’s. This band would be made up of the most talented, energetic young players in the Metroplex, and they would play all styles of music including funk, jazz, popular music with a big band feel, and yes, even the occasional march. Brought out the archives was the Six Flags Over Texas march, which had not been heard in over 20 years until resurrected by the new band.

In 1985, the new band started the day by playing at the front gate, greeting the first visitors of the day with traditional marches. Every show after that was in various location in the park, including the base of the tower, (and sometimes the top of the tower) the modern section, and outside the Southern Palace. The latter location soon proved to be the spot the band became famous for, because the band timed their arrival in the area with the southern palace crowd exit. The crowds were enormous, and it was not unusual to see people climbing trees to get a better view of the high-energy show. A typical show would include extended jazz solos, synchronized dancing, and sometimes a romantic ballad played to members of the crowd.

1986 brought the 25th anniversary of the park, and a nighttime parade that wound from Good Times Square to the Texas section. The Band followed the parade with a closing set outside the Texas train depot. The Band also appeared in, and recorded the soundtrack for a Television commercial, was featured on the morning show of a local FM radio station, and won first prize for a musical group in the Arlington Fourth of July Parade.

Starting in 1987, Six flags contracted out the on-grounds entertainment to a lessee. Older professionals from the area replaced the younger musicians, which changed the energy and appeal of the group. By 1990, the marching band program had been cancelled altogether.