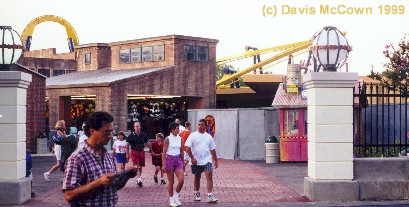 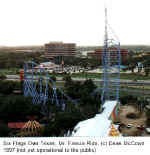 In 1999 Six Flags continued its DC Comics theming with the introduction of Batman The Ride, the park’s 10th roller coaster.  An entire themed area, Gotham City was added to accommodate the ride. Two acres consists of the Gotham City Park. Several games stands, as well as the Mr. Freeze, are located in the new section.

The ride reaches 52 mph, with a height of 109 feet. Riders feel up to 4 g’s. Designed capacity is 1,400 riders an hour. The ride is one of eight installed in various Six Flags parks. 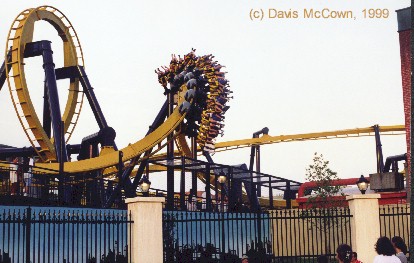 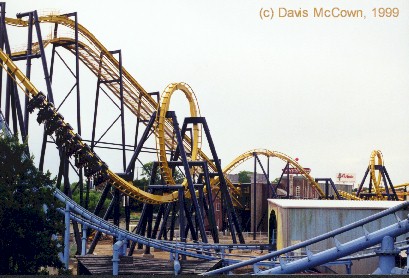 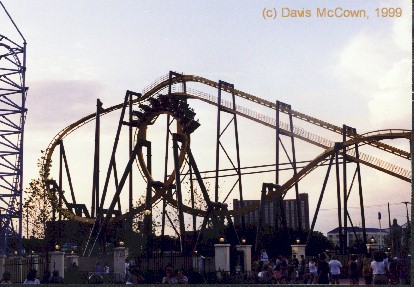 The Mr. Freeze Roller Coaster varies from traditional roller coasters in that it does not have a lift to pull the trains to a starting point. Instead, the ride uses rare earth magnets located in the station house and alongside the train body, to “push” the train out of the station.

The trains then travel through a series of elements, including an inversion, ending in a section of track which leads straight up. Near the middle of this section, another set of rare earth magnets shots the trains again, until the trains nearly reach the top of the track, giving the riders the impression that it the train will shot straight off the track. As the train travels up the track, it slowly losses power, until it comes to a complete momentary stop. The train the starts to fall backward, at which time, the train repeats the track backwards.

The trains were reversed in 2012, so that the trains leave the station backwards and repeat the track going forward. At that time the ride was renamed "Mr. Freeze, Reverse Blast".

The ride was built by Premier Rides of Maryland. 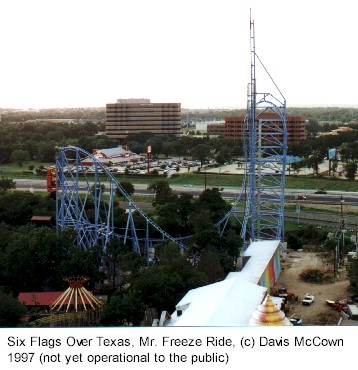 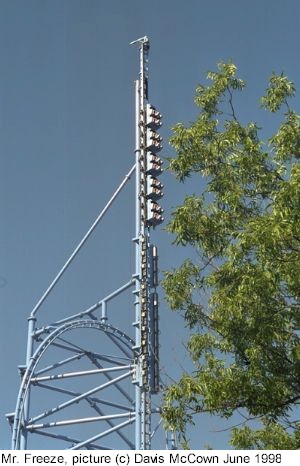 The Riddler Revenge is one of three Villain rides in the Gotham City section.

The ride is a swinging disk that travels 147 feet into the air. The disk swings back and forth while it spins counter-clockwise. The ride structure is 90 feet tall. At its highest, the disk swings out 120 degrees, 30 degrees above perpendicular to the ground. The disk obtains speeds of up to 70 mph. The ride seats 40 riders. 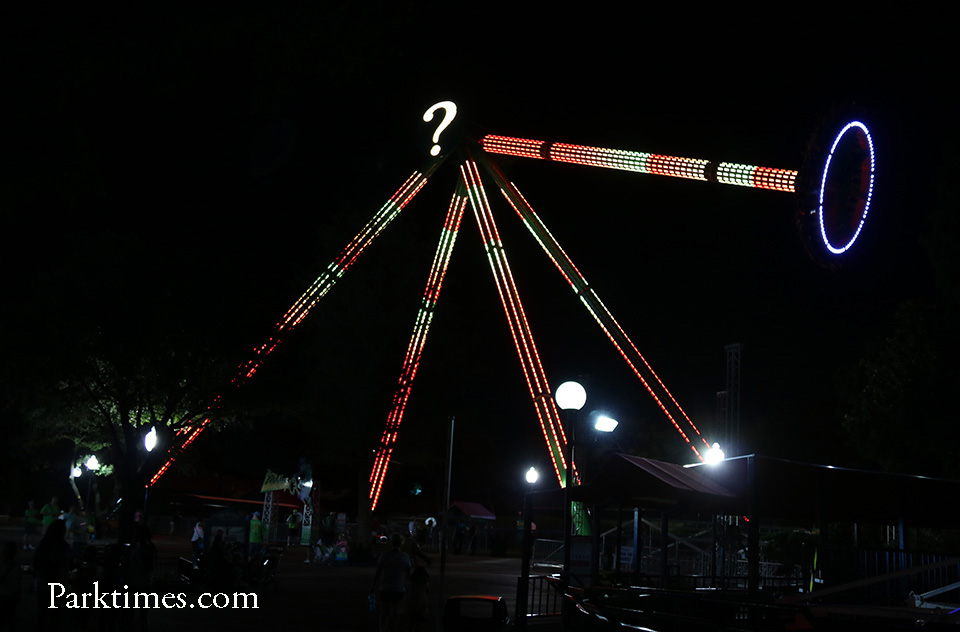 The Catwomen Whip is one of three villain rides in Gotham City. It was installed in 2016.

The ride is 65.6 feet in diameter. It is 13 feet tall when not operating and 68.5 feet when fully elevated. It rotates at 14 rpm, with a maximum acceleration of 3 gs.

The ride holds 48 guests in suspended seats mounted on a circular structure. The ride starts by spinning around.  As it does the seats wing out sideways from the structure. The ride structure then starts to rise up perpendicular to the ground, in the style of a Ferris Wheel. As it does, the units continue to spin around it, turning completely upside down as it spins. After a few moments, the ride slows and returns to its starting point.

The ride is similar to the "Enterprise" style ride Spinnaker, which was previously in the park. The Spinnanker, however, used enclosed gondolas for ride units and not suspended seats.

The Batwing is an airplane carousel ride. Riders ride in fourteen small two seat "batplanes" around a base. Each plane as a flight stick to allow the riders to raise and lower the plane as the ride runs. The planes rotate at six rpm for a ride time of one minute and forty-five second.  Around 700 riders can ride an hour.

The ride is a Telecombat style ride from Zamperla. The Batwing units are customized for Six Flags.

Harley Quinn Spinsanity (originally the Crazy Legs) is one of the three villain rides in Gotham City. It is a Trokia style centrifugal force ride manufactured by HUSS Park Attractions.

The ride has three arms that each hold seven ride gondolas. When the ride is running, the arms travel around in a circle, as well as up and down at an angle up to 40-degrees. The units reach a height of thirty feet. As the ride arms rotate, the vehicles spin around the end of each arm. Each gondola holds two guests, for a total of forty-two riders. When run with two minute rides, the hourly capacity is estimated at 900 riders.

The ride was previously installed as the Warp 2000 at Astroworld. It was transferred to Arlington after Astroworld closed in 2005 and was part of the ten new rides opened in 2006. At that time it was named the "Crazy Legs". It was renamed the Harley Quinn Spinsanity in 2016 as part of Villain Village in Gotham City.

Another ride named the Crazy Legs operated in the park from 1973 to 1982 at a nearby location. This ride is similar to the original Crazy Legs ride. The original ride was, however, a different type of ride.

Pre-opening pictures of the Joker, to open in 2017. 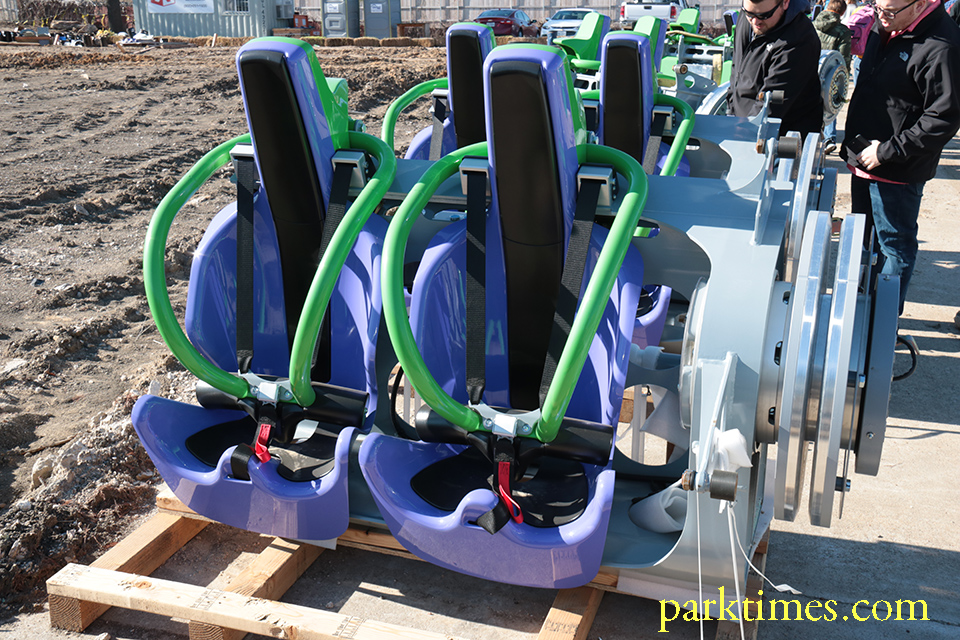 Joker Seats waiting to be installed.