The Mexican Section represents Texas during the years between 1821 and 1836, when it was a part of the Republic of Mexico. The entrance to the Mexican section was marked by the Banderas de Colores, the colorful canopied gardens, which lead to the section from the front gate.

The main attraction in the original Mexican Section was the Fiesta Train. For the small children, there was a goat-cart ride. The Mexican Market provided shopping and an El Chico restaurant provided food.

The Indian Village entrance was behind the Indian Trading Post, which was on the border of the Mexican and Texas sections.

For the second season, (1962), the Sidewinder cat and mouse roller coaster was moved to Mexico and renamed the La Cucaracha.

In 1963, the Goat-cart ride was removed, and more shopping areas were added to the market place.

In 1968, a remodeled Fiesta Train replaced the ride's original train and animations. The remodeled ride remained until the 1978 season, after which it was removed.

At the end of the 1979 season, the Banderas de Colores (Covered walkway) was removed.

In 1981, the Spanish Conquistador was added in the middle of the Mexican section, blurring the distinction between the Mexican and Spanish sections.

In 1986 the Avalanche BobSled Ride was added at the former site of the Fiesta Train. The Avalanche was later renamed as the The La Vibora  Ride.

The Ferrocarril Fiesta Train was the type of ride that defined the early years of Six Flags. Located in the Mexican Section, the well themed and colorful ride was enjoyed by everyone, from the very young, to the very old. It opened with the park in 1961, and entertained guests until it was removed after the 1978 season.

The ride consisted of two diesel-powered narrow gauge trains which carried guest through a series of light-hearted animations themed to a colorful Mexico. One of the trains was named "El Cho Cho", the other "El Cha Cha." The original passenger cars had large sombreros for tops, earning the ride the nickname, "The Hat Train."

Like the larger Six Flags Railroad, the Fiesta Train was a narrow gauge railroad.

The two railroad trains consisted of nine little square cars, each of which seat four adults. All were painted in bright pastel colors. For a roof, each of the cars had a giant colorfully painted sombrero, leading to the ride eventually being called the “Hat Train” and the “sombrero train”.

The engines slightly resembled street cars, with a rectangular structure. The ride was an outdoor “pretzel” style ride; that is a ride whose track curves in and out several times, like a giant pretzel. This allows different isolated scenes to be observed by the riders, without being distracted by the next or last scene.

The trains pull away from the small station to loudly playing Mexican music. Around the first bend riders viewed an animated band of Mexican musicians, dressed in white with large sombreros, constantly playing their pleasant tunes. The train turned another bend and riders spotted a troop of dancing tamales, as tall as people, each also wearing a large sombrero. The tamales constantly spinned as they dance to another gleeful song.

Around the next bend was a more comical scene, a group of oversized travelers, sitting on much too small burros, rocking back and forth as they head to some unknown destination. They too wore large colorfully sombreros.

When the ride was redecorated in 1968, the dancing Tamales and oversized burro riders were moved to the railroad ride, where they are now seen from the train ride.

The next bend revealed a sleepy little village, where characters in large sombreros took their siesta in the afternoon sun. Another scene was the “Gardens of Xochimilcho”, with its picturesque scenery, a small pond, with a fountain and small boat. Another mariachi band performed at the gardens.

The final scene was a bull fighting arena, the Plaza De Los Toros, where a matador challenges a large black bull, while a crowd wearing large sombreros cheers him on. As the bull moves through its paces, it appears for a moment that it is charging the train, leaving the riders with a little fright. The trains then pulled back into the station to end the ride.

For the 1968 season, the trains and animations were completely redesigned by Sid & Monty Krofft. The engines were redesigned as dragons and the trademark sombreros were replaced with more traditional cars. The central component of the remodeled ride was a Volcano which dominated the section's landscape. A small stream of "lava" flowed down the volcano, which "erupted" every few minutes with a loud "boom".

While still a family ride, the graceful scenes were replaced with more exciting ones. Mexican children, singing the ride's trademark "Fiesta" song, danced at the station. A "run-away bus" served as the remodeled rides first animation.

The train entered into the volcano and exited in the middle of a Mexican town. A gun battle was taking place in the town, and the train passed through the middle of it. Peaking from one window was Batman and Robin, foreshadowing their later more major role in the park. The shoot-out scene in Bugs Bunny's Gold River adventure is very reminiscent of this scene.

The ride ended with a trip through a circus, in which numerous animated characters performed various feats to loud music.

The La Vibora Ride,(originally, the Avalanche Bobsled), is now located in the general area in which the trains ran. 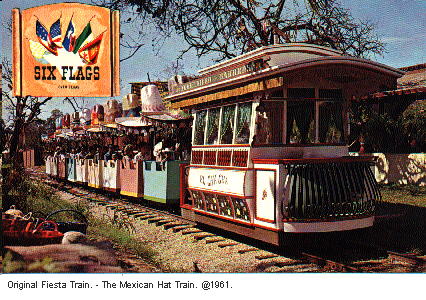 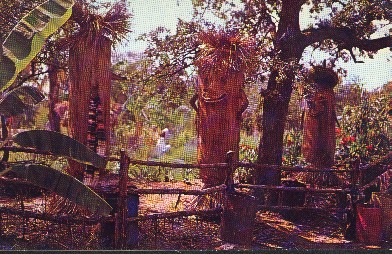 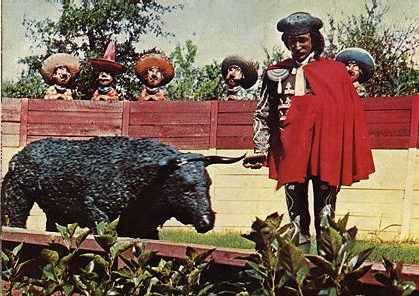 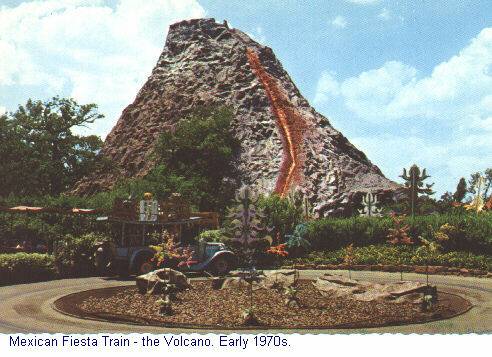 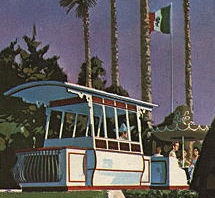 Although the Native Americans did not have a flag to be recognized in the park’s theme, they did play an important role in the development of Texas. As such, an area representing their contribution was appropriate.

The Indian Trading Post and Village is not contained within a single section, but rather sets on the border between the Mexican and Texas sections. The front of the Indian village is the trading post. The Trading Post is a large souvenir shop selling Western and Indian related items.

Behind the trading post was the Indian village. A set of four tee-pees sat in the corners of a small square blacktop performance area. Here Native Americas performed authentic hoop dances during the day.  Typically, two Native American’s perform the Hoop dance with wooden hoops, not unlike a hula hoop. A third slowly marks time on an Indian tom-tom.

The Indian trading post still sits at is original location. The Indian village, however, has been removed. 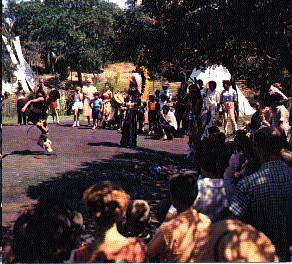 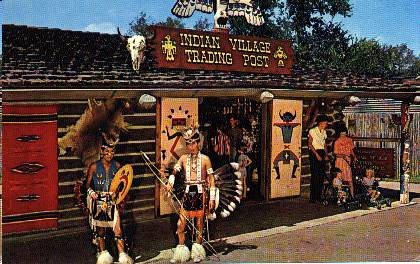 The ride, a “Cat and Mouse”, style metal roller coaster consisted of individual units, each of which could hold one or two riders. As with most coasters, the cars were pulled up a lift hill. Instead of traveling down a straight fast and steep drop, however, they descended down a winding track with sharp turns. The wheels were set back to the rear of the unit, so that as the car approaches a curve, the front end sticks out over the edge of the track before the car started turning. This design creates the illusion that the cars are constantly about to run off of the track.

The ride only operated as the “Sidewinder” for first season. For the 1962 season, it became the first ride in the park to be moved to a second location as it was relocated to the Mexican Section a and renamed the “La Cucaracha”.

The ride was manufactured by Herschell Company under the name of the Mad Mouse. 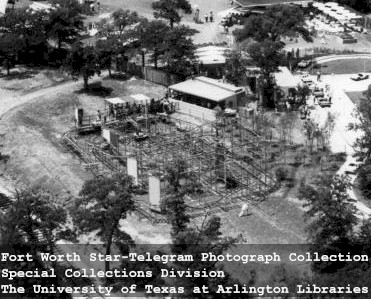 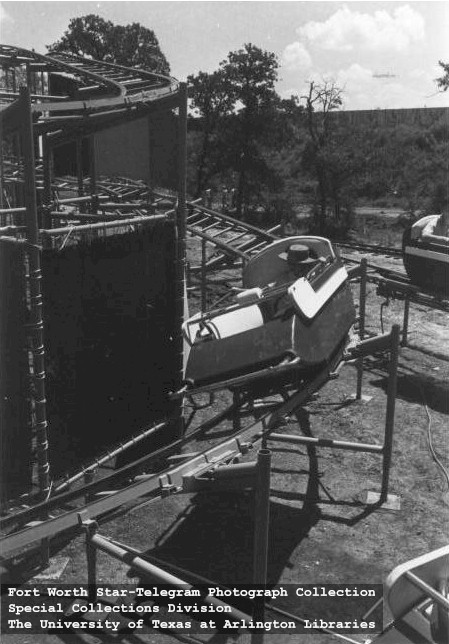 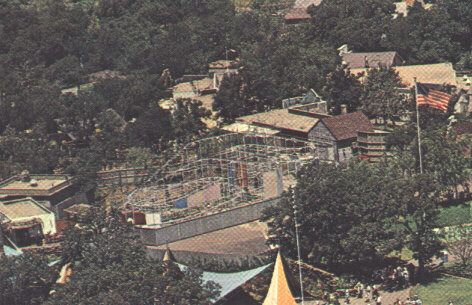 La Cucaracha in the Mexican Section 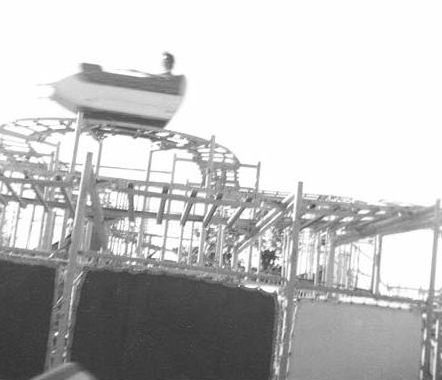 The El Sombrero, or the "Hat Ride" as it is known, was first opened in the park in 1965. This makes it the seventh oldest operating ride in the park. Most likely manufactured by Chance Rides, the Hat is a generic carnival ride, often know as the Wagon Wheel, the Tabrant, or the Chaos. The ride is designed to look like a giant Mexican Sombrero. The riders sit is a circle of two adult seats which constitute the rim of the hat. 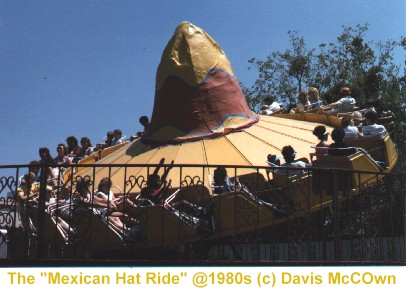 The ride begins by spinning around on an off-center axis. As the ride picks up speed, an arm raises the ride in to the air at approximately a 45 degree angle. These leave the riders spinning in all directions, around the circle of the hat, up and down at the angle of the arm, and around the platform.

The ride was originally installed at the site of the short lived La Cucaracha Roller Coaster, in an area next to the current location of the Silver Star Carrousel. It was later moved to its current location near the The La Vibora (Avalanche Bobslide) Ride.

The ride is currently painted with a yellow base. Earlier, the ride was painted blue.

The Goat Carts were authentic goat carts, small wooden carts in which two or three small children sat in the cart as it is pulled around a dirt path by a goat. The path was boarded by a small wooden fence to keep the goats from wondering off. An attendant walked along with the cart and keeps the goat moving. The Goat Carts were short lived and were removed from the park at the end of the 1963 season, after three years in the park.

Added with the ten new rides for 2006 was the La Fiesta De Las Tazas, which roughly translates to the "Party of the Cups". This teacup ride was added in the Mexican section. The ride is Manufactured by Zamperla and is located near the La Vibora Bobsled, the queue house used for the ride was previously used by the Fiesta Train and then by the Sombrero.

The teacups are mounted on in groups of three on small circular areas. The circles rotate as a larger platform rotates. In addition, the riders can turn a wheel inside the cups, so they rotate as wheel. Each teacup can hold up to five riders. Hourly capacity for the ride is 1,200 guests, with a ride length of one minute and thirty seconds. 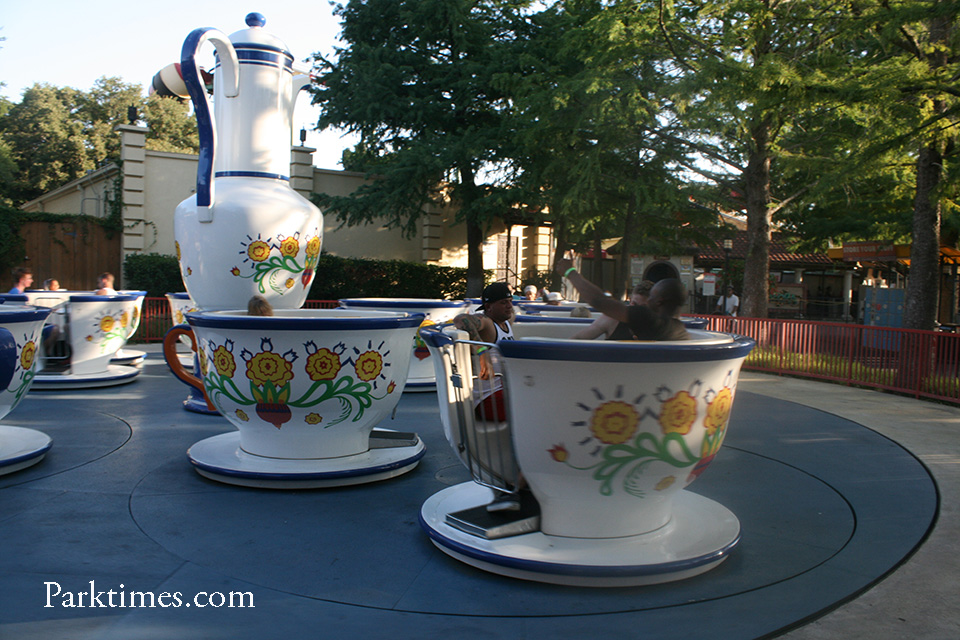